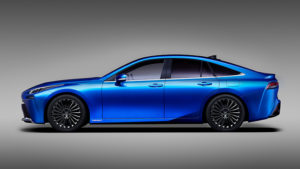 It has been more than 50 years now since General Motors unveiled the first hydrogen car. An engine running entirely on clean energy? Even more, outputting drinkable water? A deal almost too good to be true. However, it is also too good to give up on easily. Still, in the last few years, electric vehicles (EVs) have taken the “green” market almost on its entire. So, who killed the hydrogen car?

Some might say it was the overhype. Others consider the possibility of conspiracies featuring Eastern petrol moguls, whom are trying to keep oil as the main fuel source for vehicles. If that’s the case, the plan works wonderfully. According to The Guardian, 95% of today’s cars are running on fossil fuels. Put in perspective, if oil reserves would be depleted in a month, world economy would instantly crash and we would go back to medieval horse riding.

Still, there still are oil reserves. And given that oil price has constantly dropped since the summer of 2016, filling up your car’s tank doesn’t require a bank loan anymore. Unfortunately, fuel prices did not drop because we have magically come across undiscovered oil sources, but because of economic slow-down in Europe and China, combined with US shale oil avalanching the market.

Conspiracy theories have almost always fallen to pieces when a deeper analysis was done, digging for facts. As of January 17th, 2017, major oil companies and big automakers have signed an agreement towards offering more support to the development of hydrogen vehicles. The target is to multiply the current global investment of just $2 billion a year, compared to hundreds of billions spent on oil.

The fact is, everybody knows oil reserves will soon be depleted. On the same hand, apart from some shady activists, all individuals are more or less aware of the environmental impact that burned hydrocarbons have.

But still, why hydrogen?

Hydrogen fuel cell vehicles provide, at least in theory, a more than reasonable alternative. Fossil fuels are removed in their entire from the automotive process and only water gets out the exhaust pipe. Toyota Mirai was the first street legal hydrogen fuel cell vehicle to enter the US. Sadly, at $69.000 MRSP, it was hardly competitive. Not to mention that hydrogen refill stations are practically available only in California.

On the other hand, Battery Electric Vehicles seem the more reasonable, easier to implement option. This seems to be especially true with Plug-In EVs, which can be charged from a regular home power outlet. Independent survey by KPMG Global Automotive revealed that 2017 will keep electric vehicles trending high over hydrogen versions.

Arguments and predictions do however go head to head. About 75% of executives questioned by KPMG stated that, while BEVs are the eye-candy of the moment, hydrogen fuel cell technology will survive the test of time.

Where do you refill?

One of key points of FCVs (fuel cell vehicles) is the refill time. While battery electric cars take anywhere between 35 and 45 minutes, you can refill hydrogen as fast as you’d have with regular petrol or diesel – 5 minutes at most.

However, hydrogen refilling is also the nemesis. There are just 732 hydrogen charging stations around the world, compared to over 15.000 of electric stations just in US . Thus, hydrogen refill may be fast, but it’s difficult to find an actual station. And while it cost up to $2 million to establish a hydrogen station, electric charging zones have decreased in construction costs drastically.

All while providing multiple recharge points, extended mileage and tons of positive advertising from brands like Tesla, BEVs don’t seem to have gained an undefeatable lead, covering less than 5% of today’s car market.

Finally, is the hydrogen car actually dead? No.

We live in an era of trends: both positive and destructive. And, it is up to the end reader to sort throughout all the junk and find relevant information that is fully based on facts. The hydrogen car isn’t dead – globally speaking. Whether it is just a longer lasting trend, that is to be seen. However, for now there are plenty resourceful advocates giving hydrogen power bonus points and amazing concept cars.

Startup Nikola Motors has revealed a truck prototype showing the potential of hydrogen drives. Nikola One truck is promised to deliver up to 1,200 miles in one hydrogen fill. It’s not only able to go long, but also strong. Nikola One offers 1000hp and 2000 lb/ft of torque – going above high-end diesel engines.

Finally, given that Global Market for Hydrogen Fuel Cell Vehicles reports that, by 2020 there will be enough hydrogen filling infrastructure, it’s clear that we may soon witness FCVs passing along through traffic.

The hydrogen car isn’t dead. It just takes a little longer to develop, and in the end, its technology, along battery electric vehicles, will be forced towards consumers by depleting oil reserves.