Hydrogen, lightest of all the elements, makes up 76% of everything in the Universe, followed by Helium for the remainder.  Prior to Sheldon, Penny, Leonard, Raj, Howard, Amy and Bernadette   there wasn’t even hydrogen.  After the Big Bang there still wasn’t any hydrogen.  It was just a big hot soup of quarks that was so dense and energetic, that there was no room for anything to condense out.

Something (we don’t know what) caused a great disturbance in the soup’s equilibrium.  There was no “space” yet (and no substance out of which a ruler could have been made).  Nevertheless the quarky-soup particles sought to move away from each other and create “distance”.  Since they were all in contact (remember, no space, gravity, or mass exists yet) the expansion happened (essentially) instantly and the Universe popped into being.

You might think that this expansion exceeded the speed of light but there were no photons yet, and no laws had been set in stone (there wasn’t any “stone” either).  Once there was “space” we started to have laws that fixed such essential things as the value of an electron volt (1.60218…×10-19 joules).

Now the first nucleons (protons/antiprotons, neutrons/antineutrons) and electrons/positrons could form.  Just remember that if the value of the electron volt had been any other number, we wouldn’t exist right now.

Most of the initial material we started with dissolved back into energy, giving the remaining matter heat, motion, and radiation.  The matter we have is just a tiny percentage of how much there was originally.  A slight imbalance left our Universe with mostly just one type of matter.  After about 300,000 Earth-years the radiation levels dropped off enough that electrons could form shells around protons and neutrons so that we could have stable matter.

It may seem counterintuitive because we live on one of the little specks in the universe where a lot of things other than hydrogen are abundant.  Nevertheless, hydrogen is essential for every life-giving process.

Let’s consider water for a moment.  Water, or H2O, is comprised of two atoms of hydrogen and one atom of oxygen.  You could say that        water is two thirds hydrogen and one third oxygen, if you count whole atoms.

Why does oxygen weigh so much?

The increased gravity drew in most of the remaining interstellar hydrogen and, when they got big enough and possessed a high enough individual gravity, nuclear fusion started.  Right at the very edge of our ability to see into the night sky we observe the oldest galaxies in existence.  Spectrographic analysis of the 14 billion year-old light that is just reaching us now reveals that the stars have a very low metallicity, being mostly hydrogen and a bit of helium.

As stars age they use up hydrogen fuel as the fusion process converts it to helium.  It then starts a second cycle where it starts to fuse helium into oxygen and carbon.  If the star is massive enough it will then fuse the oxygen and carbon into neon, sodium, magnesium, sulphur, and silicon.

Luckily for us, big stars tend to explode at the end of their life.  They will either experience a nova explosion or a supernova explosion before spreading all these wonderful elements that they’ve created out into the Universe.  If it wasn’t for those stars blowing up, if they hoarded the material they created in their centres, nothing else would exist in the Universe.

Not only are these materials more difficult to make than helium, but they take more time.  Making things much more complex than these elements requires different interactions, but they create calcium, iron, nickel, chromium, copper and many others; it’s the brute force of the actual nova or supernova explosion that permits the creation of heavier elements beyond iron.

Every energy interaction in biology requires hydrogen.  It can take the form of carbohydrates or hydrocarbons.  We don’t have to be happy that there is so much hydrogen in the universe because without it there would be no one here to be happy about it.  This is something that just “is“.

So Back To the Planet… 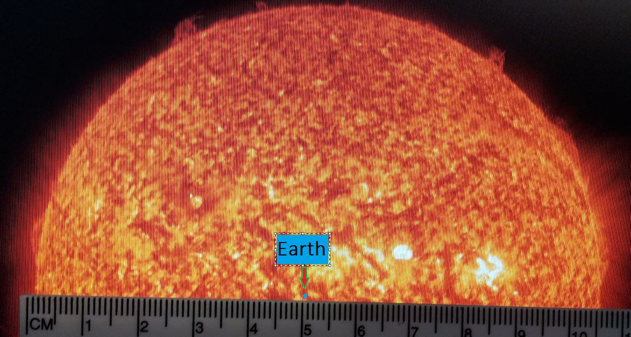 How much hydrogen is there in the Solar System?  The Sun possesses 99.8 percent of the mass in our solar system.  The monster planet Jupiter comprises 0.1% of the rest.  All the other planets, moons, asteroids, and comets, together make up the last 0.1%…  See that tiny blue dot above?  That is Earth compared to the Sun (in scale).

It’s lucky we’re not enemies with hydrogen.  It’s got us severely outnumbered…