There are basically six sorts of fuel cells and one variant.  Of course technology will change and there will be new developments.  For the time being however, we can say that all fuel cells, without exception, use hydrogen.

The Essence of a Fuel Cell 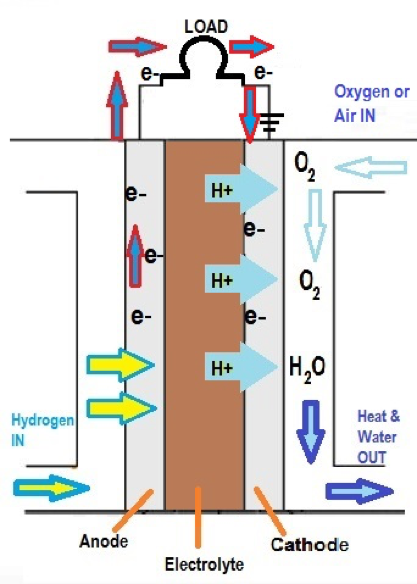 A fuel cell is not a battery—it is a generator.  Hydrogen, in one form or another enters the fuel cell, interacts with the anode where the hydrogen releases its electron so the electron can travel up to the “load” to perform some sort of work (whether that’s turning a motor or lighting a lamp).  Without its electron hydrogen is ionized and crosses over to the cathode where it recombines with its lost electron and then with oxygen to make water and heat.

What the electrolyte is, and how the hydrogen is delivered defines what sort of fuel cell it is.  For example the Apollo astronauts used alkaline fuel cells, which are about 70% efficient.  These cells use a hydroxyl electrolyte (usually potassium) with pressurized hydrogen and oxygen.  They run at a temperature of about 175° C/350° F which was great to keep the spacecraft warm, and aside from providing electricity it also provides pure drinking water.

The next type, which uses a Proton Exchange Membrane (PEM), is only about 40 to 50% efficient but it operates at a lower temperature of about 80° C/175° F.  This has a large number of advantages because the electrolyte is not liquid, so it cannot leak, and it’s not solid, so it can’t crack.

These sorts of units are capable of generating up to 250 kW, so they’re quite suitable for powering homes and cars.  At the current time they remain expensive because they require a platinum catalyst (on both sides of the membrane) which is costly.  They also need an additional component called a reformer to provide hydrogen in a pure form.  PEM cells are quite susceptible to carbon monoxide poisoning, because it accumulates on the platinum catalyst surfaces and makes them less efficient. 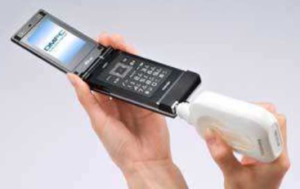 These sorts of fuel cells are a very good compromise.  All you need is purified methanol, usually diluted with water, and presented directly to the anode.  Direct Methanol Fuel Cells (DMFCs) possess the advantage of being able to utilize our existing system for fuel delivery, since it comes in a liquid form.

DMFCs, which have been around since the mid-2000s, can take advantage of the greater fuel density of methanol over hydrogen alone.  While it’s not as energy dense as gasoline or diesel fuel its ease of use makes up for any shortcomings.

When first offered in 2008 DMFCs in cell phones and laptops were a little expensive.  Technology is so advanced now that you should be able to run your Smartphone continuously for a month without plugging it in.  It’s environmentally friendly and the fuel is readily available.

PAFCs, as their name implies, use phosphoric acid as the electrolyte.  It’s imbedded in a silicon-carbide matrix, and features porous carbon electrodes that contain the platinum catalyst.  This is a very mature fuel cell and is usually used for stationary power generation, but they have been used on large vehicles such as city buses.  Its efficiency ranges from as little as 40% all the way up to 80%.  They work at about 175° C/250° F, and are capable of producing between 200 kW and 11 MW in test setups.  They’re also reasonably immune to carbon monoxide.

Any time you’re dealing with something molten you are dealing with high temperatures.  We’re speaking of temperatures nearly twice that found in a pizza oven, namely 650° C/1,200° F.  These were developed for natural gas and coal based power plants.  The cells can reach efficiencies of 85% when combined with a turbine, and a heat recapture system.

A terrific advantage for MCFCs is that they do not require a reformer to purify the fuel.  At the immense temperatures they utilize, methane and other hydrocarbons in these fuels are converted to hydrogen internally.  This significantly reduces the cost.  That extreme heat also allows the use of non-precious metals to use as the catalytic surface, instead of expensive platinum.

Its biggest shortcoming is durability.  Because of the corrosive electrolyte used, and the high temperatures maintained, each cell lasts about 40,000 hours on average (approximately five years).

SOFCs use a ceramic compound as electrolyte.  Typically this is something like calcium or zirconium oxides.  These cells are about 60% efficient, but operate at temperatures even higher than MCFCs, in the range of 1,000° C/1,800° F.  Naturally you don’t need a platinum catalyst at the temperature, and you certainly don’t need a reformer; all that waste heat can be used to create additional electricity, pushing its efficiency up into the 85% range.  Of course solid oxides are not liquid so they cannot spill or leak.  However they can crack.

The downside is that they take a very long time to come up to operating temperature, so they’re confined to power generation facilities.  It also requires a significant amount of thermal shielding to retain the necessary heat.  Most of all, at these high temperatures we encounter the durability problem.

Finally, not a unique cell type, but rather a variation on some of many of the designs where a fuel cell can run in reverse.  Essentially it takes in electricity that could be generated by a transient or intermittent source, such as wind power or solar power, and electrolyses water in order to create and store hydrogen gas which can then be used to create electricity when the winds stops or the Sun goes down.

This last type might turn out to be the ultimate solution, if we collect the water that we’re “making” and turn it back into hydrogen when we have extra power.  It’s definitely worth thinking about.