The 21st century gave birth to a race all humankind takes part to. Like it or not, the reign of fossil fuel is about to end with a large bang. Engineers, scientists and pioneers of technology developed viable alternatives with two goals in mind:

Still, what’s wrong with fossil fuel, as long as there’s still some left? In short words, greenhouse emissions. On a worldwide scale, humanity is getting around 80% of the energy it requires by burning fuel, according to World Bank stats. While the percentage may have dropped since the 60s, the quantity of fuel burnt increased dramatically, thus raising the level of greenhouse emissions. Carbon Dioxide (CO2) is the main element of the heat blocking blanket our Earth has been covered with and vehicles produce tons of it every single day. A study done by EPA shows 6,780 metric tons of CO2 have been released in the air in 2014.

How does hydrogen come into play?

The entire process is possible thanks to one or more fuel cells. A fuel cell uses a polymer electrolyte membrane (PEM) to harness electric power. The system is composed of a cathode and an anode sunk in an electrolyte, all covered on both ends by energy harnessing bipolar plates. In the anode, the hydrogen is separated into protons and electrons, while a membrane allows only protons to move further. In the meantime, electrons travel on a separate route towards the cathode, creating electricity through their movement. Once they return from the trip, hydrogen electrons react with oxygen and hydrogen protons, generating heat that can be further used by other systems.

For the moment, hydrogen cells are not being used on a full scale in the automotive industry. The first ever commercial vehicle to run solely on hydrogen is the 2015 Toyota Mirai. It runs solely using hydrogen cells and exhausts drinkable water.

Of course, all hydrogen based cars use electric motors to generate thrust. There are various advantages of an electric engine compared to a standard fossil fuel unit:

It is pretty obvious that hydrogen fuel cell vehicles are better from almost any point when compared to traditional fossil fuel cars. They indeed allow for a cleaner air especially within cities where the exhaust fog is a serious issue in the last decade. Exhausting just water is a main plus when working in this direction.

It also needs to be mentioned that current fuel cell vehicles can achieve ranges of around 400 miles before needing to be recharged. And, compared to electric vehicles that rely on batteries to work, filling a tank of hydrogen takes just as much as it takes to fill one with gasoline. However, Tesla CEO Elon Musk considers hydrogen cars as being silly. What could be the reason?

First of all, it is true that creating electricity from hydrogen takes a lot more in account than simply delivering it to a set of batteries. With hydrogen, atoms must be separated in protons and electrons, then reunited and then finally exhaust the resulting water. Even more, it is a known fact that fuel cells heat up more than you’d want to. It’s a prime reason why Toyota Mirai is using large air intakes on the front fascia, to dissipate the heat.

Furthermore, when compared to fully electric vehicles, hydrogen cars aren’t all that cheap in terms of fuel. It costs around $40 to fill a tank with hydrogen, lasting for around 350 miles, in case of Honda Clarity. On the other hand, according to Tesla’s calculator, it costs just around $16 to charge your vehicle for 400 miles. Of course, it will take 90 minutes to do that.

Someone has to admit it: Elon Musk’s statement on hydrogen vehicles only last as long as the current hydrogen infrastructure and technology does not advance. However, given the amount of research and development done in the field, hydrogen vehicles may very well become a popular choice along consumers, ensuring breathable air and lower costs.

Is this love affair headed for destruction?

There is no doubt that we love our automobiles.  The earliest models ran on either steam or batteries.  Gasoline actually came somewhat later.  Why did we switch?

That happened because there is so much energy stored in gasoline.  We could drive dozens of miles without having to recharge our batteries or stop to stoke the fire and find more water to make more steam.

Of course it was fantastic to have cars whether they were steam, gasoline, or electric.  If you could find a suitable place to get up to speed you could go faster than a horse, and do it continuously, long after a horse would have had to reduce its speed due to exhaustion.

Gasoline just made it more convenient and even more durable.  Steam and batteries faded into history.

Now we have finally come full circle, haven’t we?  We’re back to electric cars because we’ve created new batteries with large energy densities so that you can drive hundreds of kilometres or miles before you have to find some place to plug in and recharge.  The new 100 kW battery pack in the Tesla X P100D will manage 483 kilometres/300 miles on a single charge and manage 0-100 k/h (0-60 mph) in 2.9 seconds.

In many cases we could simply change the battery out and replace it with a fuel cell.  Fuel cell systems are smaller and lighter than the heavy membrane-type batteries currently in use.

Of course battery-powered vehicles won’t be replaced by vehicles with fuel cells.  The convenience of a battery powered vehicle for people with short commutes is undeniable.  They’re clean, green, quiet, and cheap to charge.  And right now a kilogram of hydrogen (in this early testing stage) is selling for about US$10 per kilogram (2.2 lbs).  The price will come down as our hydrogen infrastructure improves so that it is more comparable with the price of gasoline.

In terms of energy density, a 4 kilogram tank of hydrogen (the normal size for a car) will provide about 500 kilometres (280 miles) of driving, so that would cost you US$40.  It can be refilled in just 3–5 minutes, about the same amount of time as filling a car with gasoline.

So now it is fast, comparably priced, and provides a good range for a vehicle…what’s left?  Oh yes… the Hindenburg… 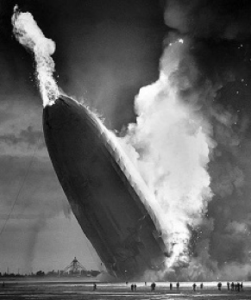 The lighter-than-air craft Hindenburg comes up in almost every conversation about hydrogen.  People like to point to the 1937 disaster as an example of how dangerous hydrogen is.  The truth is that probably nobody was burned by the hydrogen.

Burns were traced to the aluminiumised fabric of the outer envelope which supposedly protected the ballonets of hydrogen within, and to the spilt and splashed diesel fuel used to power the engines.  What most people don’t know is that 61 of the 97 passengers survived.

Despite still being 100 metres/300 feet in the air, the (presumed) lightning strike from the thunderstorm that started the fire in the tail section, allowed the rear section to descend to the ground briskly, but not fatally so.  People do not survive a 30-storey drop ordinarily.

The flames quickly flashed the length of the ship as the Hydrogen escaped and burned.  To be burned by the hydrogen a person would have to above the gas cells because hydrogen only goes up, never down.

Is It Safe For Cars? 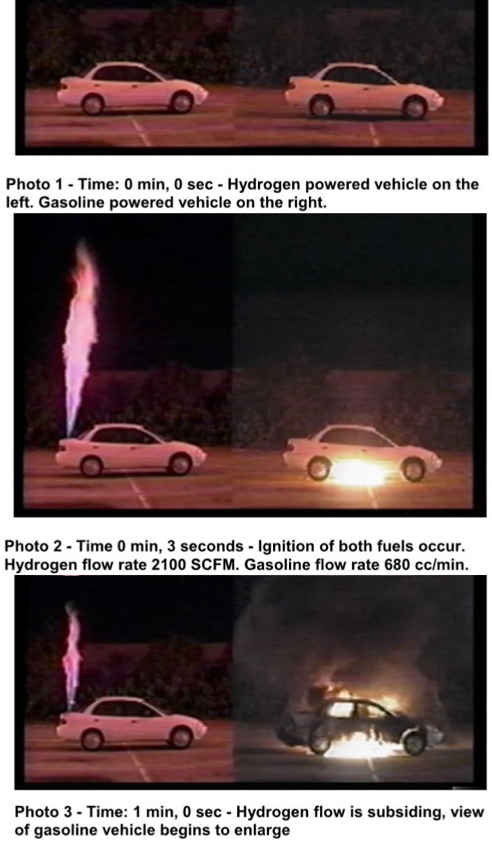 Actually, there’s more stored energy or explosive power in a car’s tank of gasoline than there is a tank of hydrogen.  More importantly, gasoline splashes, and pools, and volatises (evaporates) whereas Hydrogen goes straight up.

In a study performed by the University of Miami, in 2001, a leak-simulation test was conducted.

As you can see, the gasoline powered car (on the right), was destroyed within a minute.  The hydrogen powered car with a leak (on the left) was left completely unharmed.  It’s just basic physics: gasoline drips, pools, and collects, awaiting its opportunity to expend all of its stored energy.  Hydrogen just wants to escape.

Batteries for electric cars are probably very safe, much like hydrogen.  Still, given the choice, I would rather be in an accident with a hydrogen fuelled car, than either a gasoline or battery type.  Gasoline is obvious, but a shorted-out battery large enough to power a car could melt and fuse releasing a lot more energy.

There are a lot of reasons to pick the various types of Power Systems for vehicles.  It might be the availability of fuel; how much it cost to move from point A to point B; the environmental impact of your choice; or whether the vehicle has the capability to take you from your point-of-origin to your destination, and then back again, without unnecessary complications about finding fuel.

Within the next few years we will probably phase through from gasoline, to pure electric, and then finally to hydrogen.  Good old hydrogen is the most abundant element in the Universe, and aren’t you tired of hearing the same old story about “running out”?  Me, too…